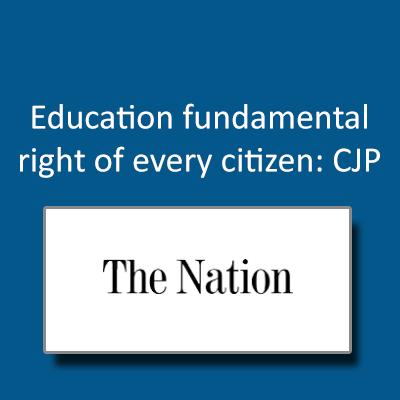 ISLAMABAD – Chief Justice Mian Saqib Nisar said Monday that education was the cornerstone for the economic development of any country and nothing could be achieved until education was given proper attention by state institutions.

“It is not the duty of the court to make policies on education, however, being a fundamental right of every citizen, it is our responsibility to ensure that the government fulfills its obligations. Therefore, every effort will be made to ensure quality education across the country,” a press statement issued by the office of spokesperson quoted the chief justice.

Chief justice gave these observations while chairing a meeting on educational reforms in the Supreme Court.

The meeting was attended by Federal Ombudsman Tahir Shahbaz, ex-chairman HEC Dr Mukhtar Ahmed, federal secretaries Ministry of CADD and Ministry of Federal Education and Provincial Training and provincial secretaries, the ministry of education of all the provinces and Gilgit-Baltistan and Azad Jammu and Kashmir.

Chief Justice Nisar gave the participants his insight and vision about education being a fundamental right of every citizen as guaranteed under Article 25-A of the Constitutional.

The chief justice asked the participants to give names for a committee to be headed by Federal Ombudsman Tahir Shahbaz to draft TORs in a minimum period of time and to suggest ways and means to bring improvements in the current education system so as to provide quality education in the country.

The chief justice also directed all the chief secretaries and the Secretary Establishment Division not to transfer secretaries/officers who are part of the committee till the completion of the task. All the members of the meeting also briefed the chief justice about the status of education in each province, facilities being extended to the students in government schools, issues and hardships being faced by them in each province as well as at the federal level.