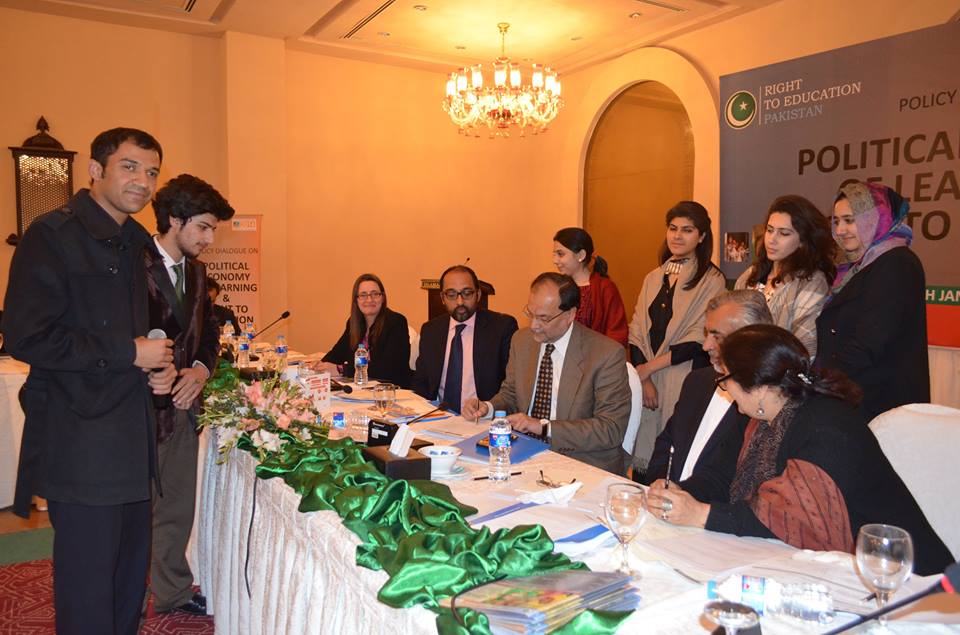 Policy Dialogue: Political Economy of Learning and Right to Education

Idara Taleem-o-Aagahi is proud to be associated with some of the world’s leading educational campaigns, one of which happens to be the Annual Status of Education Report (ASER). This is the nation’s grandest citizen-based, household oriented survey which revolves around collecting and presenting authentic data regarding the educational landscape of Pakistan, annually. But quantitative data is nothing without qualitative analysis, and more importantly specific and need-based calls for action. It ultimately comes down to what we do with the numbers if we are to create better stories for this country. The ‘Policy Dialogue – Political Economy of Learning and Right to Education’ was a commemoration of the aims and resolutions that ASER has helped us produce.

The dialogue housed the team that worked vigorously on the report under discussion, esteemed politicians and ministers, prolific education-based campaigners, and education youth ambassadors. This perfect amalgamation was meant to bring forth innovations and discuss the measures that can ensure the permanence of our tenacity in bringing children to schools. Founder Miss Baela Raza Jamil was the forefront of each session and drove the discussion in a relevant direction whilst stressing on the key points made as conversation went along.

The dialogue kicked off with highlighting the key findings of the report and sketching a graph of how far Pakistan has come since the last survey. Representatives from all provinces were invited to deliver their planned course of action for their specific political constituencies, and in doing so pledge allegiance to the cause of education. The first session was based on Baluchistan and we were joined by Mr Sardar Muhammad Raza Barrech and Mr Tayyab Lehri representing the Baluch government, Miss Sara Ruto from UWEZO, Dr Ambreen Arif from World Bank and Miss Nargis Sultana from Open Society Foundations. They talked about how Balochistan suffers from multi-grade teaching and massive teacher-student ratio imbalance. The need for large scale monetary investment and human resources became obvious as the conversation proceeded. And the Baluchi government expressed its zeal in trying to combat the current trends.

The second session leaned towards underscoring the findings of Sindh. Our panelists included Miss Sadiqa Salahuddin from Indus Resource Center, Dr Arif Alvi MNA-PTI (Karachi), Miss Hannah May Wilson from UWEZO, and Mr Salman Hummayun from Institute of Social & Policy Sciences. The major finding was that of unsatisfactory learning levels. And it was agreed that fiscal funding and mere infrastructure is of no avail if the quality of education imparted is substandard. The homogenization of public and private schools was also an idea that was widely endorsed by the attendees. It was established that educational policies require staunch implementation to change things and re open ‘ghost’ schools all over Sindh. The panelists urged the Sindh government to back all stakeholders and improve all intertwining factors such as health conditions and poverty.

The third session centered on Khyber Pakhtunkhwa and was spearheaded by Dr Faisal Bari from Open Society Foundations, Miss Zehra Arshad from Pakistan Coalition of Education, Miss Saba Gul Khattak from Sustainable Development Policy Institute, and Mr Sanjay Kumar from Pratham. The importance of collective action and tangible investment was conferred about. Greater synchronization of plans became the major call for action as heterogeneous ideas were recognized as the sole reason behind lack of implementation.

The focal point of the final session happened to be the province of Punjab. And we were joined by Dr Ahsan Iqbal MNA-PMLN, Mr Mosharraf Zaidi Campaign Director Alif Ailaan, and Miss Pauline Rose from Cambridge University. Once again, the distribution of funds shone through as the biggest predicament in terms of effective educational policies. Furthermore gender disparity was shed light upon and it was concurred that there is a need for campaigns geared towards sending girls to school. The demerits of doling out teaching jobs as patronage were also recognized as a major obstacle for effective educational policies. Autonomous district education authority was proposed; incorporation of modern teaching systems and decentralization of educational bodies was also put forward among other suggestions.

Our Education Youth Ambassadors participated enthusiastically in all these discussions and contributed their personal experiences and expectations to the vortex of ideas. Their ardor towards finding solutions was nothing short of infectious and their suggestions were highly appreciated by all attendees. The Dialogue concluded with the eminent personalities signing the Up For School forms which are a joint venture on ITA’s and A World at School’s (AWAS) part to ensure equal and compulsory education for all Pakistanis aged five to sixteen years old. Moreover, the dialogue came to a close with a much clearer vision of how the ASER data will henceforth be utilized in each constituency and how policies that were previously in the pipelines will be realized.