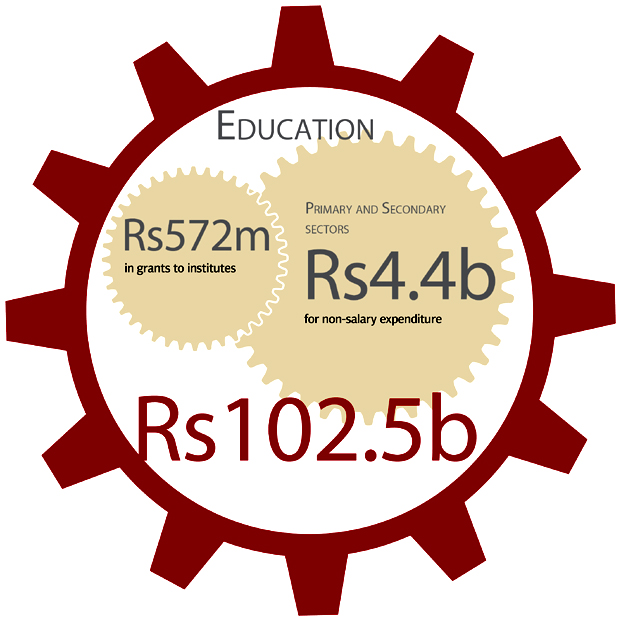 Allocation in Budget for Education

PESHAWAR: The tall claims of the PTI-led Khyber Pakhtun-khwa government about unprecedented increase in education budget have proved to be a mere jugglery of words as there is an increase of only Rs one billion in the development budget of education.

No new mega project is to be launched in the sector and only all the ongoing schemes have been retained. The projected amount in the budget for education has been shown as Rs66 billion by combining the current and development budget. Many in the government circles have claimed that the education budget has been enhanced from Rs6 billion to Rs66 billion, which is against the reality.

According to the budget document, the total allocation for education sector is Rs60 billion, which includes Rs56 billion for salaries and Rs4 billion non-salary expenses. The government claimed to have imposed an education emergency, but no such allocation has been made or project identified to show the government’s seriousness about education sector in practical terms. The amount allocated for development in the education sector under Annual Development Programme is Rs13 billion against the Rs12 billion of the previous government showing an increase of only Rs one billion.

The top focus proposed in the first budget of the new government was improvement of the conditions of the existing educational institution by constructing boundary walls, lavatories, rooms and provision of other facilities for which an allocation of Rs2 billion has been made. But this is not something new. It has been a continuous process for which similar allocations are made every year.

Similarly, Rs500 million amount has been allocated for introducing monitoring system in the education system. This scheme, too, is an initiative of the previous government, as all ground work for it has already been made. Even recruitment process for the scheme was started during the caretaker government. Third party monitoring of education institutions would be introduced for which an amount of Rs100 million has been allocated. The Khyber Pakhtunkhwa Education Commission and Joint Education Advisory Commission for reviewing curriculum and examination system is something new for which an allocation of Rs20 million has been made.

Stori Da Pakhtunkhwa is a project, which was launched by the Awami National Party-led former government which has been maintained. However, the monthly stipend of Rs10,000 -15000 in budget for the new fiscal year has been extended to top 20 position holders in all the boards for which an allocation of Rs360 million has been made.

Rokhana Pakhtunkhwa, another old project, has been extended with an allocation of Rs800 million. Focus would also be made on promotion of girl education in the remote districts like Kohistan, Battagram, Torghar like the previous government. Moreover, 100 new primary schools, upgrading of 50 primary schools to middle level, 50 middle schools to high and 25 high schools to higher secondary school level is in the next annual development programme. Work would also be started on the second phases of Cadet College Swat and Karnal Sher Khan College Swabi.