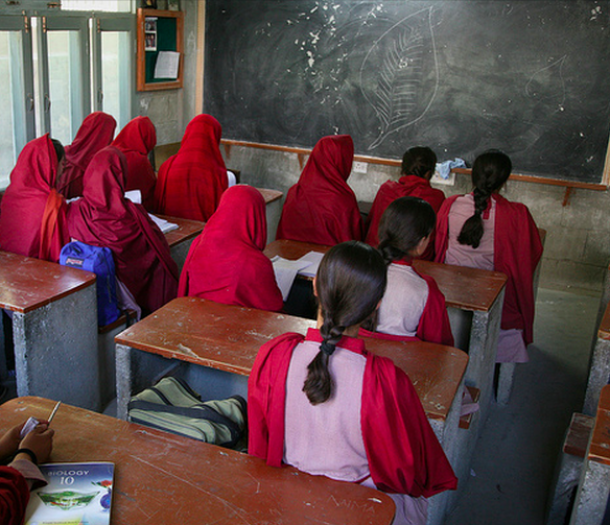 Shoot a teacher: Kill a country

Illiteracy they say is Pakistan’s scourge. It is what shackles people in the chains of ignorance, condemns them to begging at corners, to injecting drugs, to selling their daughters and waiting in vain for birthing sons. Illiteracy, is the reason that good decisions cannot be made by voters, who cast ballots because they believe the powerful can punish them if they are not elected, and forget that that they will also themselves be punished them if they are elected. Illiteracy, leaves piles of rubbish on street corners, causes brothers to kill sisters and husbands to kill wives and mobs to burn down houses. There are many, if not all, of our problems that we can pin to illiteracy, it is the core and the curse of Pakistan’s affliction.

Such a hatred of illiteracy and such a decisive recognition of its consequent ills, one would assume, would produce an equally fervent desire for literacy, for learning, for schools and all that accompanies a country’s intellectual advancement. But for all the professed love, all the avowed promises, all the passionate proclamations, there is nothing to show. In the past year, however, what was simply lazy inaction has now grown up and morphed into an actual, angry hatred of education itself…

One year ago, Pakistanis lamented only the school burnings and the school bombings done by the Tehreek-e-Taliban Pakistan. But last year, the attack on schools graduated to something more. In October, Malala Yousafzai, marked her momentous escape from the school girl killing brigade of the Tehreek-e-Taliban Pakistan. Weeks later, on November 1, 2013 a girls’ school in Lahore was attacked and then burned to the ground by a furious mob. The cause for the destruction; an accusation against a teacher for having blasphemed against the Prophet, The reported context; a harried woman copying down a passage on a blackboard, an accidentally turned page and two unconnected passaged merged together into a mistaken concoction deemed worthy of death. Death was demanded for the principal who soon became a prisoner. The teacher ran and hid and tried to save her life.

Between then and now, over 15 schools were blown up or bombed. On January 2, 2013 a bomb blast at the University of Peshawar, outside a classroom injured several people and terrified several hundred more. Going to University, it announced to everyone still believing in the value of an education; is an extremely lethal business. On February 12, 2013, a college was bombed in Mardan where a bomb had been placed outside the Physics Department. If others were left doubting, the mob that gathered atBahauddin Zakariya University in Multan on March 15, 2013 could have sealed the argument against teaching and learning. Led by the members of the Tehreek-e-Tahaffuz-e- Namoos-e-Risalat, the Multan mob had a single demand: the arrest and immediate execution of a lecturer in the University’s English Department. The man’s crime, an alleged blasphemy committed on a social networking site. The imperiled Professor fled and hid to save his life, the rabid mob and their leaders vowed that they would find him and kill him.

Then came the killing of last week when a poet and a professor, Sibte Jaffar was gunned down. The event was tragic, but everyone shrugged their head and nodded. “He was a known target” some said, being a Shia and a poet and a professor, everyone agrees today is a lethal combination; an obvious invitation for some secret gunman’s unforgiving bullet. Thus proceeds, the war against learning, where being a female student, or a male professor or anyone asking others to think, to pause, to consider, is a target. An illiterate Pakistan was one where the lack of education made the polity slow and dull and easily duped, a Pakistan that has declared war on teachers is one that is suicidal.

Rafia Zakaria is a columnist for DAWN. She is a writer and PhD candidate in Political Philosophy whose work and views have been featured in the New York Times,  Dissent the Progressive, Guernica, and on Al Jazeera English, the BBC, and National Public Radio. She is the author of Silence in Karachi, forthcoming from Beacon Press.