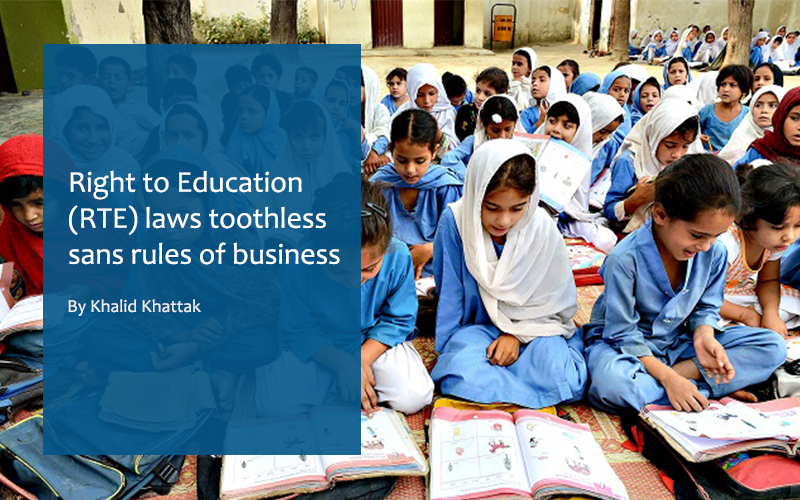 While all the four provinces and Islamabad Capital Territory (ICT) have introduced laws vis-à-vis free and compulsory education for children in Pakistan, only Islamabad and Sindh have so far succeeded in introducing subordinate legislation—the rules of business.

The implementation of these Right to Education (RTE) laws is not possible without rules of business and in such a scenario these are mere toothless laws.

These RTE laws were constitutional requirement after the historic Article 25-A (inserted into the Constitution in April 2010) which made free and compulsory education a right to all children of the age from 5 to 16. As a result, the first RTE legislation in the country was introduced by ICT in 2012 while Khyber-Pakhtunkhwa was the last, among provinces, to enact the law in 2017–six years after the insertion of Article 25-A.

However, the subordinate legislation–the framing of rules of business to implement these RTE laws—has yet not carried out in Punjab, Khyber Pakhtunkhwa and Balochistan, without which it is not possible to implement the right to free and compulsory laws. The other federating units including Azad Jammu & Kashmir, Gilgit-Baltistan and FATA have yet to introduce RTE laws, let alone the framing of subordinate laws.

In 2016, the Committee on the Rights of the Child (CRC)—a United Nations body–had expressed concern over the lack of compulsory education laws as well as poor enforcement of the RTE laws in Pakistan.

“The delay in introduction of RTE laws and subordinate legislation raises serious questions about lack of political will and absence of transparency and accountability in the whole process,” says Ahmad Ali, Research Fellow at the Institute of Social and Policy Studies (I-SAPS).

These RTE laws not only define procedures whereby the governments ensure free and compulsory education but also suggest the punishments for parents who fail to admit and keep their child/children in a school.

“If a parent fails to admit and keep the child in a school, he may not be entitled to any subsidy or poverty targeted support of the government and the government may recommend such a measure to the Federal Government or any other body providing such subsidy or support,” reads the Punjab’s RTE law.

Similarly, under the Khyber Pakhtunkhwa Free Compulsory Primary and Secondary Education Act 2017 parents not admitting and keeping their children in school could be punished with imprisonment up to one month or fine which may extend up to Rs100 per day or with both.

“While significant efforts are evident by the political governments to tackle the challenges of enrollment, quality and access, the definition of the right to a free and compulsory education can only be challenged as a right once the rules of business have been approved and implemented,” says Salman Naveed Khan, head of Political & Policy Engagement at AlifAilaan.

We are yet to understand how each government defines ‘free’, with a range of options from no-fee to provision of textbooks, uniform, school bags, and transport, Salman adds.

Five years down the line, I-SAPS reviewed the RTE laws in 2015 and noted how the term “free education” was addressed in diverse manner in these laws. The RTE laws of Islamabad, Balochistan and Sindh have included tuition fee, textbooks, stationery, schoolbags, and uniform in it. Islamabad RTE Act 2012 has also included provision of transport to the students. Similarly, Balochistan Compulsory Education Act 2014 stipulates the provision of a meal too. Whereas, the definition of free education in the Punjab RTE Act 2014 seems deficient on number of counts, it only provides a fee waiver and stops short of clearly outlining other essential items including books, school bag, stationery, uniform, transport etc.

The non-implementation of RTE laws is indeed unfortunate at a time when the country has 22.6 million out-of-school children (OOSC). At the same time those in the schools do not have basic facilities to avail including drinking water, toilets and electricity etc. Half of the public schools in Pakistan’s Sindh province don’t have drinking water facility for students, 73 percent of schools in Balochistan province are without toilets facility for kids while seven percent of schools in Punjab province don’t have electricity.

If the time that the provinces took to enact the RTE laws after Article 25-A is taken as a measurement tool, one can guess the governments would take several more years to introduce subordinate legislations.

Experts see true implementation of Article 25-A as a huge challenge for the governments as more and more teachers, schools and related facilities are required to bring millions of OOSC back to schools.

Atif Khan, Minister Education of Khyber Pakhtunkhwa, told CIRP that his government, though late among provinces to enact the RTE law, had already started working on framing of rules of business saying this was not an easy job as there were financial and legal implications. He added the task might take two to three months.

Dr Allah Bakhsh Malik, who has recently been posted as Secretary School Education Department Punjab, however, claims the department would soon introduce the rules of business for effective implementation of RTE law. “We have already started working on this,” he adds.

According to Ahmad Ali, there are multiple reasons behind the delay in framing of RTE laws related rules. He says, besides financial and legal implications, there is issue vis-à-vis capacity as the governments are not prepared administratively and institutionally. “Above all, an effective demand is missing,” Ahmad says while regretting lack of public discourse on effective implementation of RTE laws and response from the governments.

Main image caption and credit: Pakistani girls attend class at a school…Pakistani girls attend class at a school in Mingora, a town in Swat valley, on October 9, 2013, the first anniversary of the shooting of Malala Yousafzai by the Taliban. Yousafzai, the teenage activist nominated for the Nobel Peace Prize, says she has not done enough to deserve the award, as her old school closed October 9 to mark the first anniversary of her shooting by the Taliban.  AFP PHOTO/A MAJEEDA Majeed/AFP/Getty Images