There was overwhelming consensus by over 50 parliamentarians, government officials, teachers, academics, innovators and civil society at the round table on ‘Accelerating Actions to Implement Sindh Right of Children to Free & Compulsory Education Act 2013 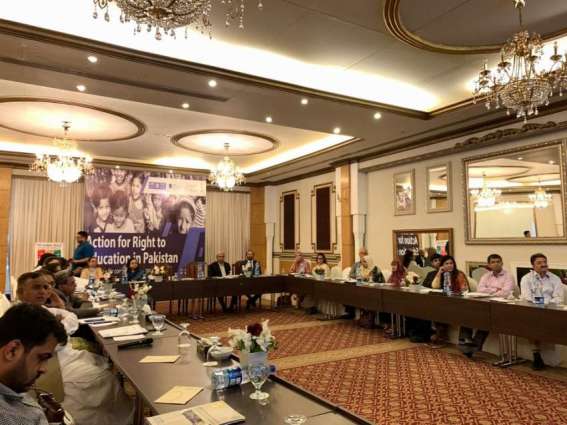 Islamabad (Pakistan Point News – 09th November, 2019) There was overwhelming consensus by over 50 parliamentarians, government officials, teachers, academics, innovators and civil society at the round table on ‘Accelerating Actions to Implement Sindh Right of Children to Free & Compulsory Education Act 2013, that slow implementation of right to education or Article 25 A in Sindh, Pakistan will clearly impact achieving the SDGs 2030 /SDG 4 on education, just like MDGs in 2015 and the Convention on the Rights of the Child (CRC) commitments! There were calls to reverse this reality through a positive disruption needed urgently, by all stakeholders in the education sector. Dr. Kaiser Bengali said ‘clearly no ‘politician’ loses an election because he/she fails on promises made for education- the sector remains hostage to a great betrayal by state and society alike’. 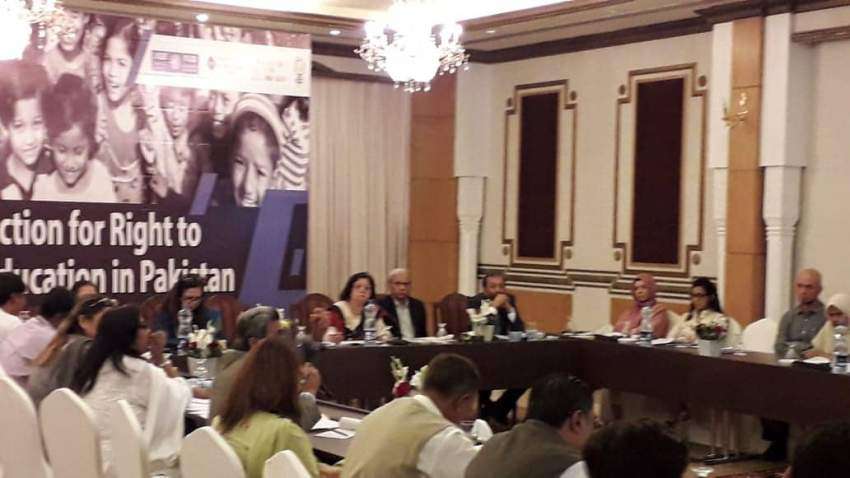 The action packed round table was supported by the United Nations Democracy Fund(UNDEF) and Idara-e-Taleem-o-Aagahi (ITA) Right to Education campaign backed by article 25 A and the provincial act and rules. The focus of the meeting was on ‘governance’ and quality particularly highlighting Chapter V of the Sindh’s RTE on SMCs and Teachers together with Chapter VII committed to establishing the Education Advisory Council and Secretariat to track implementation. The meeting set the context by sharing highlights of key indicators on education in Sindh, followed by specific reading of the Act/Rules 2016. Baela Raza Jamil urged that each one present at the Round Table was an important ‘influencer’ in their own right; be it the teacher in the classroom, the headteacher in the school to the Secretary in her Department, Education Foundations in their growing areas of operations through PPPs, Innovators, Civil Society members in their sphere of operations and Academics in university and research. She urged that, ‘the time has come to respect voices of young children like ‘Greta Thurnberg’ in Sweden, and three teenage girls, “Ms Mishael Hyat, Leila Alam and Laiba Siddiqui’ who have recently filed a petition in the Lahore High Court, demanding, guarantee of their rights for clean air and education; we need more children in Pakistan stepping up their claims and entitlements; let’s support such brave young activists”

There were voices in the audiences which highlighted some excellent examples of positive actions through public private partnerships such as Aaron Awaron of Deaf Reach who shared that compared to the past when all ‘deaf’ children had to sit their matric and higher secondary exams in Karachi only, now this facility is available through combined efforts in Hyderabad, Nawabashah and Sukkur as well; the Sindh assembly has just passed a Bill allowing adults with hearing impairments to have driving licenses; Aron underscored there is good news too on some fronts through public private partnerships. Some adopters spoke about their significant wins in school improvement and training SMCs. A headteacher from rural Sindh spoke about how she was able to mobilize local community and not just take the enrolment from 250 to 2500 but is able to improve quality, resources for learning and technology through huge local efforts; this is a great case study to highlight; SEF spoke about its work, as a semi-autonomous department doing its best to ensure quality education for the 21st century across Sindh within the resources provided. Merit based IBA Head Teachers who are still not regularized spoke about their great leaps forward on their campuses for increasing enrolment, equity and quality with innovations, but felt demoralized by lack of action by SELD for failing to finalize their contracts. The atmosphere in the hall was positively charged with energy, and honesty by almost all participants pleading lack of knowledge about 25 A law/rules in Sindh; however, they all committed to actions for a fundamental right.

Over 20 pledges were made for accelerating implementation of the Sindh -Children’s Right to Free and Compulsory Education Act 2013 and its Rules 2016, including developing a tracker with SELD and stakeholders for implementation of 25A by Ms. Shajia Sarfaraz, a citizen activist and education consultant. Academics, trainers, headteachers, teachers, Assistant Director (Primary) schools Seema Zahid agreed to propagate widely the Sindh RTE Act & Rules; whilst Dr. Ghazala Rafique from AKU pledged support for awareness about the articles on Early Childhood Education to parents and teachers. A headteacher from Sukkur vowed to open a second shift for the most vulnerable out of school children. The leader of the Opposition Syed Firdous Shamim Naqvi (PTI,) pledged to support the implementation of RTE through a bi-partisan approach to make a difference to the future of the children of Sindh and Pakistan, admitting that this sector has been given a stepchild treatment bordering on criminality by many key stakeholders, parliamentarians, government, teachers, even parents themselves. He vowed to support amendments to the act as well as mobilizing parliamentarians at the Assembly for an awareness session about the 30 articles of the Act and Rules respectively and their obligation to oversee its implementation. Mr. Farooq Sattar, (MQM) promised to make a pledge without making U turns and after a long winded conversation, agreed to meet the Chief Minister of Sindh regarding implementation of the Act and Rules for right to education in the province. Azcorp’s representative Ms. Madiha Rehman pledged awareness through comics and Adeel Durwesh of Parhao Sabaq suggested an urgency of making education more relevant through enterprise skills for students.

Dr. Kaiser Bengali, economist and expert pleaded that education is highly fragmented as a sector and clearly remains off targets; it cannot be cohesively addressed until it is well coordinated and decentralized to local levels backed by resources and authority for action. He proceeded to give the example of Bangladesh where the Prime Minister set aside one day a week with her cabinet to make critical services for public a possibility; there are no similar trends in Pakistan. Whilst acknowledging the work of ITA, its ASER reports and leadership, he agreed to do everything possible including being a part of ‘dharnas and hunger strikes’ for 25 A. Ms.Alia Shahid, Secretary Women Development Department in Sindh promised and pleaded for actions to accelerate quality education for girls, that is the most critical pillar for women’s empowerment and gender based budgeting which is the only tangible way forward to gender justice.