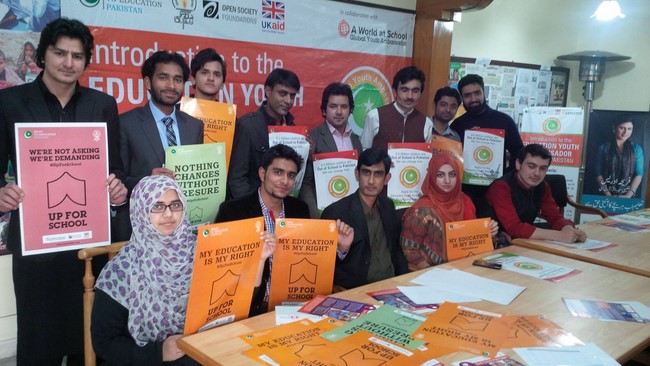 Welcoming the 105 new Education Youth Ambassadors, The Agents of Change!

The RTE team was elated to welcome on board the second batch of the Education Youth Ambassadors via a series of Welcome and Orientation sessions held in Islamabad, Lahore and Peshawar. Idara-e-Taleem-o-Aagahi and A World At School were thrilled to interact with the fervent and devoted youth activists from FATA, SWAT, Khyber Agency, Mingora, Mohmand Agency, Charssada, Islamabad, Muzaffarabad, Rahim Yar Khan, Lahore and various other cities. More than 50 young activists vying for the Right to Education for ALL, participated in the session and laid out their role for the program besides, sharing their individual efforts and initiatives to combat the education crisis in Pakistan.

The orientation sessions were prolific in terms of highlighting the current spaces the EYAs could infiltrate and form groups to solve challenges within their regional domains. Moreover, the sessions worked to unite the education activists from various parts of the country and belonging to various ethnic backgrounds on a single platform; the interaction among the ambassadors generated an ardent debate on the issues pertaining to education access and quality, and their possible solutions thereby, inculcating within themselves a strong vision and resolve to take the call for action forward. The details of the program were explained in depth along with the ‘DOs’ and ‘DON’Ts’ of the ambassadorship explaining the various intricacies and obstacles attached with education activism. Furthermore, the ongoing campaigns and projects already undertaken by the EYAs from Batch 1were introduced to the new recruits to give them a fair idea of what is expected of them as EYAs and to motivate them to take on innovative and feasible initiatives to yield concrete results when campaigning for education reforms. Moreover, details and targets of the ‎Up For School‬ campaign-the largest signature campaign which seeks to mobilize individuals, organizations and households to stand up against the barriers preventing the pursuit of education for more than 58 million children throughout the World, were shared with the EYAs.

The young activists responded with increased vehemence, pledging to hit the targets and eagerly looked forward to participate in the upcoming training sessions, debate and discussions. They were not only motivated to act as a team with their EYA peers but, were also eager to associate themselves with various partners and organizations through the program to broaden their network and contribute tangible measures to contain the undulating education crisis in Pakistan.